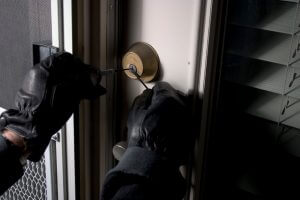 The law provides protection for the property of members of the society. This is achieved through the criminalisation of certain acts like house breaking and burglary.

It should be noted that these offences cover situations where the offender breaks into the house to commit a crime and then subsequently breaks out.

These two offences would be considered below.

Meaning and Ingredients of House Breaking

House breaking can be defined as the act of breaking and entering into a dwelling house in order to commit a felony. The following are the essential ingredients required to prove the offence of house breaking:

The breaking is considered constructive if it is done through the means of trickery, threats or collusion with someone already in the building, or the entrance is through a chimney or other openings in the building which are permanently open but are not normally used for entrance into the building[2].

In the case of R vs. Boyle[3] it was held that the act of a person, intending to commit a felony, in gaining entrance into the house by posing as a sanitary inspector amounted to breaking.

In the case of State vs. Onwemunlo[4], it was held that the act of a thief entering into a house through a door that was already open would not be considered as breaking. Also, if the door is partially open and the thief opens it fully, it cannot be fully regarded to be a breaking[5].

It should also be noted that the breaking is not only of the external part of a building, it can also be of an internal part. For example, if a house help who is allowed into the house breaks into a locked room in the building, it would be regarded as a breaking[6].

According to S.410 of the Criminal Code, a person is regarded as having entered a building when any part of his body or any instrument used by him in breaking is within the building. In the case of Collins vs. State it was held that the act of the accused in allowing just his leg into the building was sufficient to establish entering.

According to the provision of S.1 of the Criminal Code, a dwelling house is:

Intent to Commit a Felony

Breaking into a house is not only to commit the offence of theft. It could be for the commission of other felony like murder, arson and so on. It should be noted that at the time of the breaking in, the suspect must have the intent of committing the felony. If for example, A enters a building which he believes is on fire but when he enters he carries valuables, it would not be regarded as house breaking[8] [9].

It should be noted that the breaking and entering must not necessarily be in the same night. In the case of R vs. Smith[11] the breaking was on Friday night and the entering was on Saturday night, it was regarded as burglary.

Punishment for the Offence

[8] It would only be regarded as House breaking if after committing the offence, he breaks out through another part of the building.

5 thoughts on “House Breaking and Burglary”