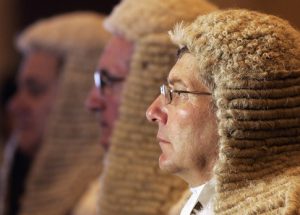 The Reception of English Law

Nigeria, as we all know, was colonized by Britain. Hence, it is trite that some elements of British law will have a major influence on our legal system. The English law is made up of rules of common law, doctrines of equity and Statutes of General Application. These English laws have been imported into the Nigerian legal system. in fact, they make up the bulk of our law. The use of English Law in Nigeria is backed up by the following authorities:

Subject to the terms of this or any other ordinance, the rules of common law, doctrines of equity and Statutes of General Application In force on January 1st 1900 shall be in force in the jurisdiction of this court.

From the above, it can be seen that we inherited the common law of England, the doctrines of equity and statutes of general application in force before 1900. Most people already have an idea of what common law and equity are all about (If you don’t, see types and classifications of law). The ambiguous term here is “statutes of general application. This meaning of this term would be explained below.

What is a Statute of General Application?

According to the Interpretation Act and the Supreme Court ordinance, statutes of general applications are those that are in force in England on 1st January 1900. Unfortunately, this definition is not adequate. Due to this, the courts have gone at length to elucidate on what Statutes of General Application entail.

In the case of Dede vs African Association ltd[1], the court held that although the Supreme Court ordinance identified that Statutes of General Application are applied in England, nevertheless, it should be taken to mean statutes applicable not just in England but throughout the United Kingdom.

In the case of Attorney General vs. John Holt and co ltd[2], Osborne CJ. Held that Statutes of General Application are statutes that are applied by all civil and criminal courts and bind all citizens. He called this a rough but not infallible test for the authenticity of a Statute of General Application.

Finally, in the case of Young vs Abina[4], the West African court of appeal declared the land transfer act 1897 a statute of general application. This is because it applied to all persons who died after 1st January 1898 and it was in force on 1st January 1900.

It is worthy to note that Nigeria having got independence in 1960, the received English law is only of persuasive authority in view of the fact that Nigeria is now a sovereign state and as such, Nigerian law is supreme. Nigeria shall not be governed by any other person except in accordance with the provisions of the constitution[5].

Also, the interpretation Act provides in S. 32(2) that these foreign laws would only apply in Nigeria to the extent of local jurisdictions and local circumstances. For instance, the supreme court in the case of Idehen vs idehen[6] refused to apply the Wills Act of 1837 (a statute of general application) since there was a local law in place; the Wills Law of Western Nigeria.