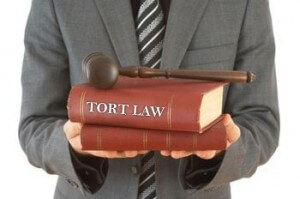 What is Strict Liability?

Strict liability occurs where the defendant in an action is responsible for damages that result from his act, whether he was negligent or not.  Strict liability is divided into two main parts:

The Rule in Rylands vs Fletcher

The rule in Rylands vs Fletcher is one that borders on strict liability. In the case, the defendant got some contractors to construct a reservoir on his land. Due to the negligence of the contractors, water leaked from the reservoir to the plaintiff’s coal mine located below the land, thus causing extensive damage to it. The conduct of the defendant didn’t appear to come within the scope of any existing tort. Thus, leading to the formulation of the rule in Rylands vs. Fletcher[1]. This rule is embodied in the pronouncement by Blackburn J:

The person who for his own purposes, brings on his land and collects and keeps there anything likely to do mischief if it escapes must keep it at his own peril and if he does not do so, is prima facie answerable for all the damage which is the natural consequence of its escape.

When the case got to appeal, Lord Cairns, in the House of Lords, added an extra requirement that the thing brought must be a non-natural user of the land.

Ingredients of the Rule in Rylands vs Fletcher

From the above stipulations, it can be deduced that there are some ingredients that need to be established before the rule in Rylands vs Fletcher can be applicable. They are:

The rule in Rylands vs Fletcher applies to anything which is likely to do mischief if it escapes. This extends beyond things which are inherently dangerous like gas, petrol or chemicals. It includes harmless things like water which could become dangerous if accumulated in quantities large enough to do mischief.

Bringing and Accumulation of the Thing to the Land

What this means is that in order for the rule in Rylands vs Fletcher to apply, the defendant has to artificially bring to his land the subject matter likely to do mischief. Hence if the thing which causes damage is something which is naturally on the land, the defendant would not be liable.

In the case of Wilson vs. Waddell[2] it was held that the defendant was not liable for water that seeped into the plaintiff’s mines since the water was naturally located in an underground reservoir. In the case of Giles vs. Walker[3] it was held that there would be no liability for vegetation that escapes if it grows naturally on the land in the form of weeds and other uncultivated growth. However, there would be liability if the trees were artificially planted by the plaintiff.

Non-natural Use of the Land

… Some special use bringing with it increased danger to others, and must not merely be the ordinary use of land or such a use as is proper for the general benefit of the community…

There must be an Escape

What this means is that for this rule to apply, the subject matter must have escaped into the land of the plaintiff. In the case of Read vs. Lyons[5], escape was defined by Lord Simmons as the escape from a place in which the defendant has control or occupation of the land to a place over which he has no control or occupation.

In the case of Ponting vs. Noakes[6], a horse reached out and ate a poisonous leaf from a tree in the defendant’s land. This resulted in the death of the horse. The court held that there was no escape since the tree did not extend past the defendant’s boundary.

Defences to the rule in Rylands vs Fletcher

The following are some of the defences that can be used to excuse liability under the rule in Rylands vs Fletcher:

Consent of the Plaintiff

This is a general defence in the law of torts. It is embodied in the maxim: violenti non fit injuria. Thus, if the plaintiff consents, directly or indirectly, to the use of the property he cannot complain about any subsequent damage. If for example, both tenants in a building agree to the use of a tank placed on the defendant’s floor, if the water subsequently leaks to the defendant’s apartment and causes damage, he cannot complain because he has already consented to it.

Default of the Plaintiff

The rule in Rylands vs Fletcher would not be applicable in a situation in which the damage suffered was as a result of the plaintiff’s own default. In the case of Dunn vs. Birmingham Canal Co[7] the plaintiff knowingly constructed a mine below the defendant’s canal. It was held that since he knew of the danger of constructing beneath the canal but he still went ahead, he had courted liability and as such would not have any remedy.

In a situation where the damage caused was as a result of unexpected natural disaster, it would be regarded as an act of God, thus freeing the plaintiff from liability. In the case of Nichols vs. Marshland[8], the defendant had been collecting an artificial pool for years by diverting water from a stream. Subsequently, a very violent rain fell which destroyed the pools and caused water to destroy the plaintiff’s bridges. The courts held that there was no liability since the harm was caused by an unexpected natural event.

Act of a Stranger

Application of the Rule of Rylands vs Fletcher in Nigeria

The rule of Rylands vs. Fletcher is applicable in Nigeria through numerous court decisions. The most popular of these is the case of Umudje vs. Shell BP Petroleum Development Co of Nigeria Ltd[11]. In this case, during the cause of oil exploration by the defendant, it blocked a stream from flowing, thus interfering with the fishing rights of the plaintiff. Also, the waste oil accumulated by the defendant escaped to the plaintiff’s land, causing damage.

6 thoughts on “Strict Liability: the Rule in Rylands vs Fletcher”