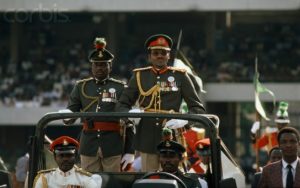 Civilian rule which started in 1979 was short-lived due to the perceived corruption of the civilian politicians. It was this atmosphere that encouraged the Nigerian military, under General Muhammadu Buhari, to take over power from the civilians on 31 December 1983. This period of Nigerian military rule lasted from 1984 till the return of democracy in 1999.

With the return of Nigerian military rule in 1983, the attitudes of the courts to ouster clauses also had to evolve to meet the needs of the time. The first action of the military government was to pass Decree No 1 of 1984 (Constitution Suspension and Modification) Decree. The effect of this decree was to suspend parts of the 1979 constitution that were in opposition to military rule.

Due to the experience of the military in the first phase of Nigerian military rule, the military was more concise, clear and unambiguous whenever it ousted the court’s jurisdiction. Thus, whenever there was an ouster, the courts unequivocally obeyed since most of the jurists during this period belonged to the positivist school of thought.

There are two major attributes that make this second phase of Nigerian military rule unique compared to the first period. They are

This issue was addressed by the court in the case of Military Governor of Ondo State vs. Victor Adegoke Adewunmi[1]. In this case, the validity of the appointment of a chief was questioned in the High Court. While this case was still pending in court, the Military Governor of Ondo State enacted Edict No 11 of`1984 which ousted the court’s jurisdiction form hearing chieftaincy matters. It also made it an offence for anyone to challenge the validity of the appointment of a chief in the court of law. The issue for contention was whether or not the court should succumb to the provisions of the edict.

The court held that S. 6 and 236 of the 1979 Constitution[2] were spared by Decree No 1 (Constitution Suspension and Modification Decree) of 1984. Thus, any ouster of the court’s jurisdiction by an edict would be in contravention to the provisions of Decree No 1. As a result, the courts did not succumb to the edict.

This decision did not necessarily decide on which law ranked higher between a state edict and the unsuspended parts of the 1979 Constitution. The court effectively hid under the authority of Decree no 1 to protect their jurisdiction.

However, the subsequent case of Dokun Ajayi Labiyi vs. Alhaji Mustapha Moberuagba Anretiola[3] put this to rest. In this case, the court listed the hierarchy of laws in a military regime. The hierarchy is listed below in descending order:

From the above hierarchy, it is clear that after Decree No 1 and other Military Decrees, the next in line is unsuspended part of the 1979 Constitution. Thus, state military governments could not oust the jurisdiction of the court through the use of edicts.

[5] See S. 44 of the 1999 Constitution of the Federal Republic of Nigeria as amended