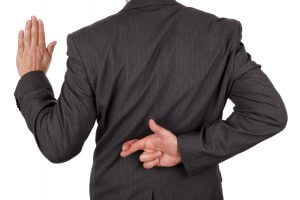 Misrepresentation is basically of three types:

A false statement made knowingly without belief in its truth, or made recklessly, carelessly without concern as to its truth.

In the case of Reese Silver Mining Co vs. Smith[2], the directors of a company issued out a prospectus stating the advantages of working a particular mine. They did this without ascertaining the truth of their assertions. When it was later discovered that their statements were untrue, they were held liable for fraudulent misrepresentation.

In the case of Sule vs. Aromire[3], the defendant advertised certain premises for sale. In order to prove the validity of his title, the defendant gave reference to a lawsuit which purportedly declared him the owner. In reality, the lawsuit was in respect to an adjoining property. When the plaintiff bought the property, he discovered that it validly belonged to third parties. The court held that this was a case of fraudulent misrepresentation, thus the defendant was held liable.

In the vase of Nocton vs. Ashburton[4], the plaintiff sued his solicitor because the solicitor had given him improper advice regarding the security for a mortgage. The solicitor did this because he stood to benefit from his client’s loss. The court held in this case that the misrepresentation was a negligent one, and thus the solicitor was held liable for the plaintiff’s loss.

…accountants, surveyors, valuers and analysts, whose profession and occupation is to examine books of account and other things and to make reports on which other people, other than their clients, rely in the ordinary course of business.

Lord Denning further classified the class of persons, apart from their direct clients, to which a duty was held as:

The court held that Heller & Partners was liable for fraudulent misrepresentation. They were however let off the hook due to the exclusion clause “without liability on our part” in their reply.

In this case, a company was statutorily incorporated by the British Parliament to construct tramways by means of animal power (horses). However, if the consent of the Board of Trade was obtained, they could make use of steam power. The directors of the company believed that the Board of Trade would approve their request since in the earlier processes to be followed, they didn’t meet any objections. They represented this to the plaintiff, which induced him to purchase shares in the company.

Subsequently, the Board of Trade didn’t give its assent and thus the company had to be closed down. The plaintiff thus sued for fraudulent misrepresentation. The court held that it would not be applicable in this case because the representor honestly believed in what they represented. It could also not be negligent because by following the due process and meeting no objection, they had tried their best to ascertain the veracity of their assertions. The defendants were thus held not liable for misrepresentation.

13 thoughts on “MISREPRESENTATION IN THE LAW OF CONTRACT”