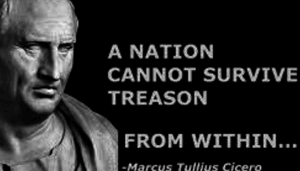 The Offence of Treason

Treason has been defined by the Black’s law dictionary 9th editions as:

The offense of attempting to overthrow the government of the state to which one owes allegiance, either by making war against the state or by materially supporting its enemies.

According to the provision of the Criminal Code, anyone who levies war against the state in order to intimidate or overawe the president or governor of a state is guilty of treason and should be punished by death[2].

The Criminal Code also categorises as treason anyone who conspires with others, either within or outside Nigeria, to levy war against Nigeria[3].  It is also treason to instigate a foreigner to invade Nigeria with an armed force[4] See: Enahoro vs. Queen[5] .

It should be noted that if any person who is under the age of 18 is involved in treason, such person would not be executed but would be detained on the pleasure of the president[6]. Similarly, S. 39(2) of the Criminal Code provides that if a pregnant woman participates in treason, the procedure stated in S.376 of the Criminal Procedure Act should be followed[7].

Whether or not the persons involved in act of treason are military personnel is immaterial. Also, the number of persons carrying out the act is not a factor in determining the offence. The essence of waging the war must be for general or public purpose, if it just for private reasons, it would best be regarded as a riot or public disturbance.

The Offence of Treasonable Felony

According to the Black’s law Dictionary 9th Edition, treasonable felony is:

An act that shows an intention of committing treason, unaccompanied by any further act to carry out that intention.  This offense usu. results in life imprisonment rather than the death penalty

Acts which constitute treasonable felony in Nigeria are contained in the provisions of S. 40 to S.43 of the Criminal Code.

The first instance of treasonable felony is contained in S. 40. According to this provision, anyone who becomes an accessory after the fact to treason or has knowledge that some people want to commit treason but doesn’t report to the appropriate authorities, is guilty is a treasonable felony and would be punished by life imprisonment.

Also, the Criminal Code in the provision of S.41 punishes by life imprisonment anyone that forms an intention to carry out the offence of treason.

It is also a treasonable felony for anyone to prepare, advise, aid or participate in any act of war against a traditional chief or a band of citizens[9].

It should be noted that according to the provisions of S.43 of the Criminal Code, a person cannot be tried for treason or treasonable felony if the offence is tried two years after the commission of the act. `

[7] The procedure stated here is one that concerns the reduction of a capital punishment to life imprisonment in the case of a pregnant woman.

13 thoughts on “TREASON AND TREASONABLE FELONY”